I spent my last full day in New York visiting the Museum of Modern Art. What a great way to lead up to my departure and beginning this project. I was especially inspired by the exhibit Transmissions: Art in Eastern Europe and Latin America, 1960-1980. Artists use subtle and not-so-subtle visual alterations to tell stories. 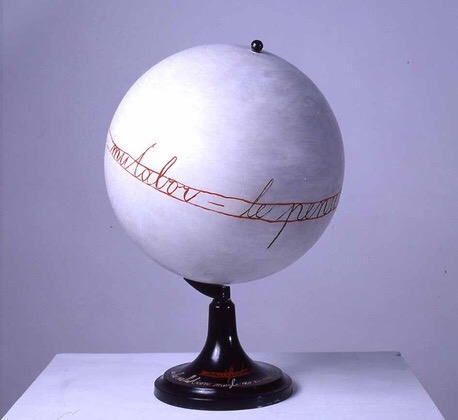 Mangelos (Dimitrije Bašicevic) | Manifest de la relation | 1976. What statement does a washed out globe with text on it make? What does global communication look like? How can words cross boundaries like countries?

In her piece “Gone: An Historical Romance of a Civil War as It Occurred b’tween the Dusky Thighs of One Young Negress and Her Heart,” Kara Walker uses 18th century cut-paper silhouette. She transforms this traditional art form into one that tells a story that is more often than not ignored due to the uncomfortable process of acknowledging stereotypes, old and new, and the stories of marginalized and oppressed groups of people.

The placement of pop-culture images makes bold statements. When I saw Love by Marisol, I immediately began to think about themes of addiction, love vs. lust, what is the connection between a blow job and Coca Cola, desire, control…all because of the placement of a coke bottle and the title of her work.

Doris Salcedo’s piece, Atrabilious, really stood out to me. ‘Atrabiliarios (Atrabilious) was conceived in response to testimony the artist gathered from relatives and loved ones of those who disappeared during the Colombian Civil War, an armed conflict that began in the 1960s. Worn female shoes in sealed niches are stand-ins for the missing bodies and evoke reliquaries for the remains of saints. “I believe that the major possibilities of art are not in showing the spectacle of violence but instead in hiding it,” the artist has said. “It is the proximity, the latency of violence that interests me.”‘ The symbolic representation of missing people was striking.

I left the MoMA wondering

I suppose we’ll find answers to these questions over the next several weeks. Stay tuned!